A member of the Umman temple family, he was sent by Akkar to help the adventurers deal with their suspicions of the Kimah family (Episode 104: Loose Ends), nearly dying in an ambush he was forced to depart before the party entered the secret warehouse. During his brief stay, the powerful barbarian has developed a crush on Siduri, sending her flowers after the Red Lion War.

Foostus gained a great deal of fame for his frantic defence against the Red Lions, such that he was invited to the collection of movers and shakers (Episode 107: Party at Kimah’s Place), where his interest in Orobok’s mine was a bit too much for the ambitious dwarf. He went along with the party to battle Ssorgess (Episode 108: Ssorgess), but departed afterward to hunt the legendary Behemoth in the Kharsannu forest in the hope of impressing Siduri. 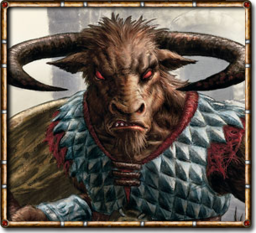