The priest-king of Urkesh is a powerfully built man. He has personally joined military activity since he took the throne, but has not let his skills suffer.

He came to power 15 years ago (985 in the Urkesh chronology) when his father Ekur died. He is now 40 years old. His rule has been hard, but he believes that is necessary in his shrinking world. Gilgamesh is his younger brother and he also has two surviving sisters (Lilith and Ishtar). His chief advisor is Akkar Akkad.

Gulkishar sent his brother to rescue Utuk after he was captured on a routine patrol by Taran’s Red Lions. He was surprisingly sympathetic when her learned that Krivv, Acacia and Zariastra assaulted Utuk after Gilgamesh had exchanged himself as a prisoner (Episode 103: The Red Lions), but wroth with having to pay the bandits. In his fury he gave command of the army to Utuk (Episode 104: Loose Ends).

Utuk’s poor leadership nearly lead to Gulkishar’s dead (Episode’s 105 and 106: War), making Utuk a paraiah. Zariastra was able to prevent the king from indulging in brutal reprisals on the remaining Red Lions and the dispossessed by appealing to his vanity, encouraging him to create a more positive image of himself with the people.

Prior to the Kimah party (Episode 107: Party at Kimah’s Place), Gulkishar’s efforts of image enhancement included commissioning statues of himself and sending heralds into Low Town proclaiming his greatness.

His reaction to Utuk’s death (after Episode 108) is muted, as he blamed him for the failures that nearly lead to his death at the hands of the Red Lions.

Upon learning of the Demon King cult and Sejanus’ involvement, he orders the tiefling’s execution (Episode 111), but the cultist was already dead. Gulkishar wanted all the tieflings rounded up to be examined, but was convinced by his brother for a more diplomatic approach to rooting out cultists.

While Gilgamesh and the party are in the Rimmanik Wastes rescuing Kara, Gulkishar, his family, and his younger sister Ishtar are assassinated by poison (occuring towards the end of Episode 112). 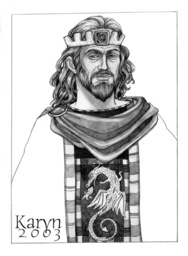