Krriv grew up as a member of the peasant class, the son of a farming family who work land on the far edge of Urkesh… land which has been increasingly overrun by the encroaching wilderness. Of necessity, Krriv learned to handle a blade in order to fend off wild creatures who would sometimes find their way onto the farmland. Eventually, the aristocratic family that owned the land faded into history, overtaken by a more powerful family. The farm on which Krriv worked, along with the remainder of the peasants there, were forgotten, being so far from the main city and virtually in the surrounding wilderness. Krriv was forced to find an alternate means of earning a living.

Upon a visit to the city proper, Krriv was fascinated by the bloodsports that occurred in the local arena — something of the visceral combat spoke to his Dragonborn blood. He inquired around the area, and found that he could earn a decent income (though at great personal risk) as a gladiator. He entered his first arena fight — against a group of harrowed slaves — mere days later, emerging victorious. Future fights merely raised his stature among the crowd, quickly becoming a fan favourite. Krriv took to more elaborate armor and weapons to further enhance his image — his favoured weapons late in his career were dual waraxes, with which he could quickly dispatch entire groups of foes. 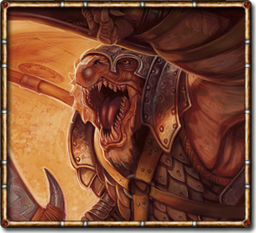