Head of the Arcanists

In his 40s, he has been the head of the Arcanists for over a decade.

A brilliant wizard, Lavant has never dabbled in politics and remained a faithful servant of the crown. He was the head of the order when Zariastra joined it.

Lavant was consulted as to the nature of the Silver Key in Episode 103: The Red Lions, providing cursory information at the time. Subsequently he’s learned more (Episode 107: Party at Kimah’s Place) and believes he’s close to learning what was written on the key. He jocularly joins a drinking competition with Foostus at the party, during which the party learns he has given muted support to Ishkibal.

He learns the words and relays the information to the party (Episode 109).

Lavant steps in when the party tries to seize Sejanus (Episode 110), but eventually comes to a mutual compromise with Gilgamesh and both removes the aberrant shard from Krivv and helps them with the cultist.

After Gulkishar‘s assassination, Lavant declared his open support for Ishkibal, which leads to his estate being surrounded by hostile Arzan faction forces (Episode 112). Because of the chaos, it is only with Gilgamesh’s intervention (Episode 113) that he finally receives Helen to remove her aberrant shard. Lavant tells Zariastra that he fears they have no hope in the conflict, so he wants her to locate tunnels that could be used to evacuate the vulnerable arcanists—he believes these tunnels exist and that entryways may be found in the Empty Quarter. 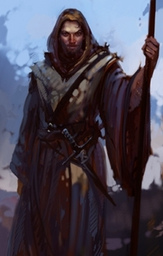