Head of the Ghorvas merchant family

Orobok is one of the luminaries invited to the Kimah party (Episode 107), where he attempts to convince the attending party members to invest in a speculative mining venture (earning more interest than he wants from Foostus). After the party he arrives while Acacia is being attacked, rendering her assistance while desperately trying to earn her investment.

Orobok reconnects with the party when his miners disappear in uncovered ancient tunnels (Episode 109). Orobok promises compensation from the profits of the mine in return for the party’s help. When the party takes a breather from the ruin, they have him send Helen to the temple and send for Gilgamesh’s soldiers (Episode 110). The earthquake that subsequently destroyed the underground tunnels are little impediment to his mining project. 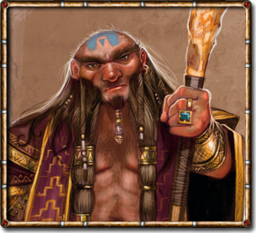