A handsome tiefling in his 30s.

Sejanus was adopted by the Diaga family when he was very young. An excellent sorcerer, he became a regular inclusion on Urkesh military patrols.

Sejanus approached the adventurers after overhearing a suspicious conversation in a Low Town bar (Episode 104: Loose Ends). He subsequently lead them to a secret Kimah warehouse in the Empty Quarter where the group was ambushed by mercenaries meant to look like Kimah family men (during the fight, Sejanus saved Foostus’ life). The warehouse proved to be empty and trap-filled.

Invited to the party (Episode 107: Party at Kimah’s Place), Sejanus had a private talk with Zariastra that led to the two planning to meet later in the city. When Zariastra was attacked by Utuk troops looking for vengeance, Sejanus arrived to help her defeat them. Back at the party, Siduri talked to Ashala Kimah, head of the family, about the reports Sejanus had given of a conversation that involved her. Ashala denied that it happened. 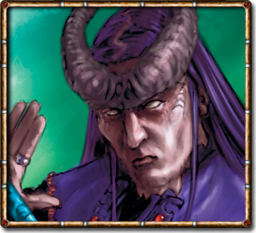