Defeated in a skirmish by Gilgamesh two years ago, he carries a pathological hatred for him, posting a bounty for his death (something men sent by Hudool the Bandit King tried to claim in Episode 103: The Red Lions).

Zissren, ambassador from the Blue Clan, has learned the Ssorgess is planning to assault Urkeshi villages while the city recovers from its war with Taran‘s Red Lions, offering to help Gilgamesh remove his threat once and for all (Episode 107: Party at Kimah’s Place). The party reached the lair with Zissren’s help and then defeated and killed Ssorgess (Episode 108). 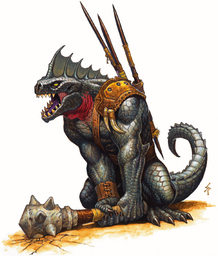