Heir to the Warad family

A powerfully bulit man in his late 30s.

Former companion of Gilgamesh in his carefree days of hunting and patrolling, Utuk still has the same attitudes that Gilgamesh has evolved from.

Utuk continues to patrol and in Episode 103: The Red Lions, he was captured by Taran‘s Red Lions. The party was sent to ransom or free him, with Gilgamesh negotiating for the release of Utuk and his companions and offering himself as a ransom. Utuk’s elitest attitudes enraged Krivv, Acacia, and Zariastra, who attacked and subdued him. Some of Utuk’s men escaped however, so there was no way to shape their story or have their revenge, leading to trouble.

Utuk was given command of the army (Episode 104: Loose Ends) because of Gulkishar‘s anger at having to pay a ransom. Utuk conscripted his army and planned a great slaughter of both the Red Lions and the dispossessed in the forest. He was caught unprepared by the Red Lion surprise assault (Episodes 105 and 106: War), nearly dying both at Taran’s hands and (surreptitiously) Zariastra’s. Gilgamesh saved his life, supposedly ending his desire for revenge on his attackers.

His failures have made him a political paraiah in Urkesh, increaing his rage at his perceived enemies. At Kimah’s party (Episode 107: Party at Kimah’s Place) he attempted to bring in his weapons, but was denied. Later, his men tried to kill Zariastra, but were foiled by her (with help from Sejanus. Aware of Gilgamesh’s missions against Ssorgess, he followed the party with his men and lay in wait for their return. Seeing the group half-dead and exhausted, he haughtily attacked them (Episode 108), but was killed in the battle. 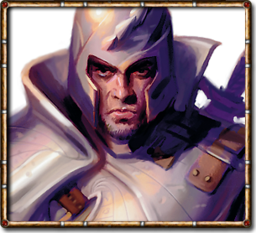